In New Rankings, Is Georgia Holding Its Own? 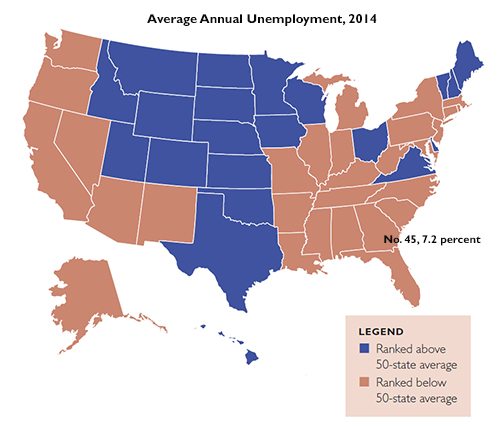 While other states have made significant gains in revenue collected since the end of the Great Recession, Georgia has not. This and other important findings were uncovered in a recently published Georgia State University report that ranks Georgia vs. the rest of the United States on 38 metrics, including per capita state and local taxes, infant mortality rates and state credit ratings.

The report also provides a comprehensive view of trends in total state or local government revenues and expenditures, as well as comparisons within specific areas such as education, health and transportation.

The driving factors behind this research were questions from policymakers, media and other people who have asked where Georgia stands in comparison to other states across the nation. The rankings can also be used to help determine reasons for Georgia’s slower recovery compared to other states.

“This report helps others ask informed questions about what actions we need to take to reach the goals and objectives we set for ourselves as a state. It’s a complicated process, but we hope this guide gives people the information they need about what’s going on in Georgia,” Davis says.

The content and format of the report, published by the Andrew Young School’s Center for State and Local Finance in collaboration with the Fiscal Research Center, mirrored the Joint Legislative Audit and Review Commission of Virginia’s annual report, “Virginia Compared to the Other States.”

“We decided to use similar metrics because they seemed relevant to Georgia as well. We will evaluate different metrics each year to continually make the report relevant to our state,” Davis says.

In spite of its low revenue relative to other states, Georgia shows higher rankings in some areas of the report. For example, Georgia is spending more on higher education, ranking No. 15 in per capita state support for public and private higher education.

However, understanding Georgia’s rankings is not as simple as singling out individual metrics.
“The beauty of this type of report is that it provides an overall picture. If you focus on one metric, it doesn’t give you the whole story. You have to look at several different metrics and piece them together to see what’s really going on in the state,” he says.

This report is the first of an intended annual publication. To download a copy, go to http://cslf.gsu.edu/files/2015/06/Georgia-Rankings-Among-the-States_June2015.pdf.

Economist Elton Davis serves as a senior program analyst for the Georgia General Assembly in the Senate Budget and Evaluation Office. He holds an M.A. in Economics from the Andrew Young School of Policy Studies at Georgia State University and is a former graduate research assistant for the Center for State and Local Finance.