ATLANTA — Revenues from Atlanta’s 10 tax allocation districts (TADs), districts where incremental growth in property tax revenues is used to finance economic development projects, are expected to be up significantly in the current tax year, according to a new Georgia State University report.

The report finds Atlanta’s TADs are expected to post strong growth in 2016 with a projected revenue increase of nearly 30 percent, or $21.5 million overall, based on preliminary assessment data for the tax year 2015. The highest projected increase of nearly 43 percent is in the Atlanta BeltLine district. Popular destination Atlantic Station is expecting an increase of about 27 percent. The new projections are the first glimmer of progress following years of lackluster growth blamed on the Great Recession.

“Despite the Great Recession’s effects on redevelopment activity in Atlanta’s TADs, the city’s use of tax increment financing has created nearly $2.5 billion in new taxable value, a better than 10 percent increase,” said Dick Layton, an expert in Georgia municipal finance and author of the report, released by the Center for State and Local Finance.

The study shows that several of Atlanta’s 10 self-financing districts have been quite successful despite recent troubling times. Assessed values have more than doubled in six of the districts, including an increase from $7 million to $538 million at Atlantic Station. Still, the Great Recession created hurdles that may have a lasting impact on Atlanta’s future use of these districts, Layton said.

Tax collections peaked in fiscal years (FY) 2010 and 2011 but then declined nearly across the board. Atlantic Station saw a 21 percent decline from FY 2011 to FY 2012; Atlanta BeltLine, a 30 percent drop; and Eastside, a 36 percent drop. In one example of economic fallout, developers at Atlantic Station converted newly constructed condos into lower-valued apartments when available space went unused.

The study also discusses concerns raised about management over the years of Atlanta’s redevelopment program, including the accumulation of unused funds in certain TADs, high administrative costs for some TADs, the overcommitment of Atlanta BeltLine funds to Atlanta Public Schools, as well as issues associated with the ongoing evaluation of TAD progress in meeting economic development goals.

“It should be noted that many, if not all, of these concerns, originated as and when the TADs were being created, leaving subsequent city administrations to deal with them,” Layton said.

The report notes that Atlanta has been one of the most active users in the country of this form of financing. Outside of California cities, Atlanta is second only to Denver. With the economy picking up, self-financing districts will likely regain some of their popularity. As Atlanta considers new uses for tax increment financing, the report suggests the city should pursue more aggressive oversight and evaluation of each TAD’s progress toward meeting goals and objectives. 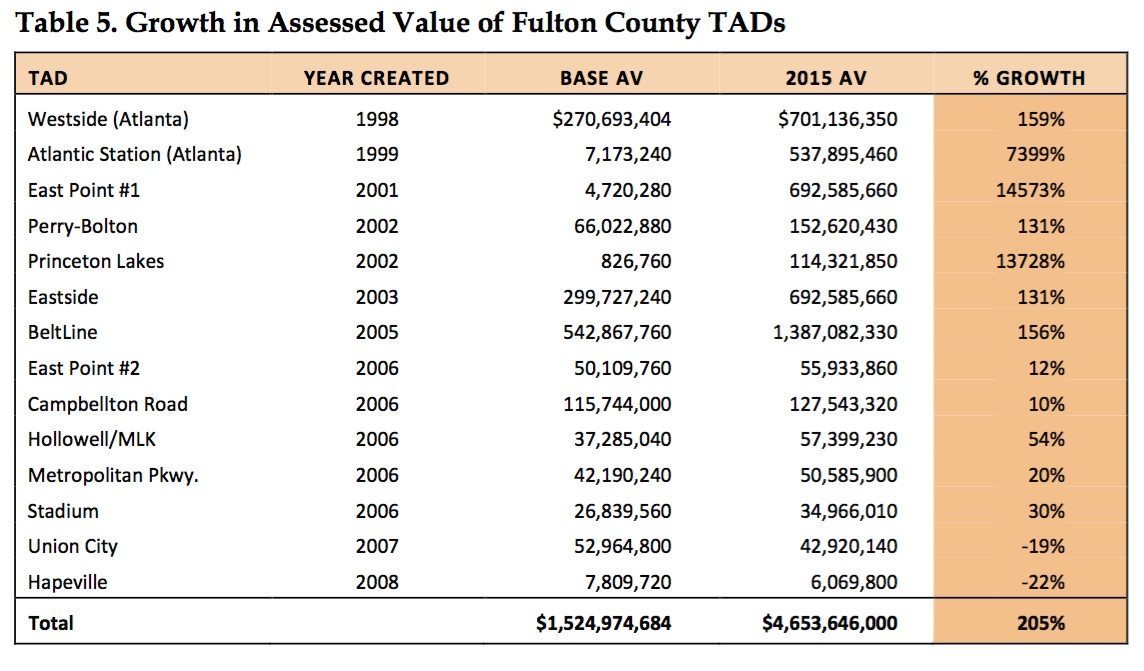