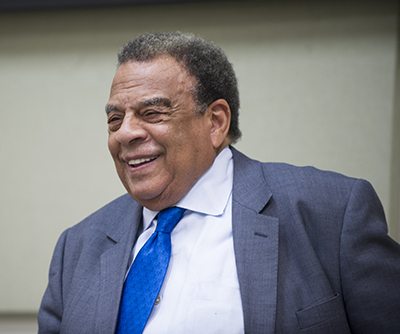 Ambassador Andrew Young, a noted civil rights leader and former mayor of Atlanta, speaks on leadership and public service during the Center for State and Local Finance’s executive education training.

Ambassador Andrew Young, a noted civil rights leader and former mayor of Atlanta, will be a guest speaker at the Center for State and Local Finance (CSLF) in May.

He will speak as part of the CSLF leadership training being held on May 11-13 at the Andrew Young School of Policy Studies in Atlanta, Ga. The school was named after Young in 1999.

Young, 84, served as Atlanta mayor from 1982-1990, during which he was instrumental in bringing the Centennial Olympic Games to Atlanta in 1996.

Among other accomplishments, Young also served as ambassador to the United Nations — the first African-American to do so. He currently chairs the Andrew J. Young Foundation.

During his discussion, Young will share lessons learned while working in government and with public officials, as well as his personal leadership style.

We are honored that Ambassador Young will visit CSLF’s executive education program. The deadline to register for this opportunity is May 4.