What You Need to Know About Georgia’s Community Improvement Districts

If you live in metro Atlanta, chances are you have encountered services of community improvement districts, or CIDs. But what exactly is a CID?

It can be difficult to distinguish Georgia CIDs’ services and county or city services. For example, did you know that the ambassadors seen throughout downtown Atlanta are managed by the Atlanta Downtown Improvement District (ADID)? 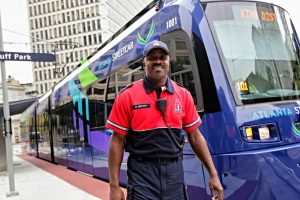 What is a CID? Georgia CIDs are a type of business improvement district (BID), an economic development tool used worldwide. A BID is a group of property owners within a defined geographic area where a majority of owners agree to impose additional taxes or fees on themselves (such as a property tax) to fund public services.[i]  Georgia CIDs are a quasi-governmental entity with the “legal characteristics of both the governmental and private sectors.”[ii] CIDs’ primary financing mechanism is an additional property tax, which is levied on commercial and industrial properties that are not otherwise tax-exempt.

In the 1980s, a group of property owners in Cobb County, Ga., were looking into tools to improve mobility in the Cumberland Galleria area. After seeing Virginia’s CIDs, the group worked with the Georgia legislature and other stakeholders to gain buy-in for the creation of Georgia CIDs. In 1984, the enabling legislation for Georgia CIDs was incorporated into the Georgia Constitution as Art. IX, Section VII. Four years later, Cumberland CID became the first in Georgia; it is still active today. Today, there are more than 25 active CIDs, with most clustered in or near metro Atlanta.

Purpose.  Per the Georgia Constitution, Georgia CIDs are enabled to provide the following services:

Creation & Renewal.  CIDs can be created in a city or in unincorporated areas, and they may span multiple jurisdictions. Creating a CID is a two-step process. First, every jurisdiction that wants a CID must pass an enabling CID act in the Georgia General Assembly. You can determine if the city or county already has a CID enabling act by checking the Georgia Code.

Once the enabling act is in place, a prospective CID must follow another series of steps at the local level, as outlined in the graphic below. In this context, property owners refer to commercial or industrial owners and excludes owners of residential or tax-exempt properties.

STEPS TO CREATING A CID IN GEORGIA (LOCAL LEVEL)

Some CID enabling acts require that CID members vote after a period of time, typically six years, to renew or to dissolve the CID. However, other acts do not have a renewal requirement. CIDs also may be dissolved by petition or local government resolution, as specified in the individual enabling act.

Governance & Administration.  Governance requirements, particularly board composition, are laid out in the CID enabling act. Although there are variations in structure, a board of directors typically governs CIDs. Usually, CID acts stipulate that the CID will elect some board members and the city or county will appoint at least one member (required by Georgia constitution). However, in a few instances, the act specifies a board comprising only appointed members. Administration also varies, but the majority of CIDs have a management company or staff.

Coordination & Financing.  Georgia CIDs are not mandated to coordinate projects with any entities, other than with appointed board members. However, some CID projects, like road work, necessitate federal, state, county or local project approval. Additionally, some CIDs prefer to work closely with their governing authority on most projects; others have a more indirect working relationship.

As mentioned, CIDs’ revenue primarily comes from an additional property tax levied on commercial and industrial properties in the area. The Georgia Constitution prohibits CIDs from taxing any properties used residentially, including multifamily properties. CIDs also can issue bonds, though none have yet directly issued a bond. CID projects can also be funded through local, state and national funding, such as special-purpose local-option sales tax and state grants.

Conclusion. In sum, there is an increasing proliferation of CIDs in Georgia, with at least nine new CIDs in the past five years.  CIDs are a tool that has increasingly influenced development and economic growth in Georgia.

Learn more about community improvement districts in a related report. →