During the Great Recession, school districts in Georgia saw their revenue decline at both the state and local level. Austerity cuts were implemented at the state level, and property tax digests decreased, affecting local revenues. This blog briefly summarizes the geographic pattern and timing of declining and recovering revenues across Georgia’s school districts during and following the recession. (See methodology notes below.)

Public schools in Georgia are funded by state, local and federal revenues. The state government contributes the largest share for the majority of districts. The average state, local federal contributions in school year (SY) 2016 were 53, 40 and 7 percent, respectively. At the state level, K-12 education is funded from the general fund and distributed through several programs, the largest of which is the Quality Basic Education (QBE) funding formula. Property taxes are the main source of local revenues for local systems. These revenues are driven by the value of the real property located in the district and the millage rate. 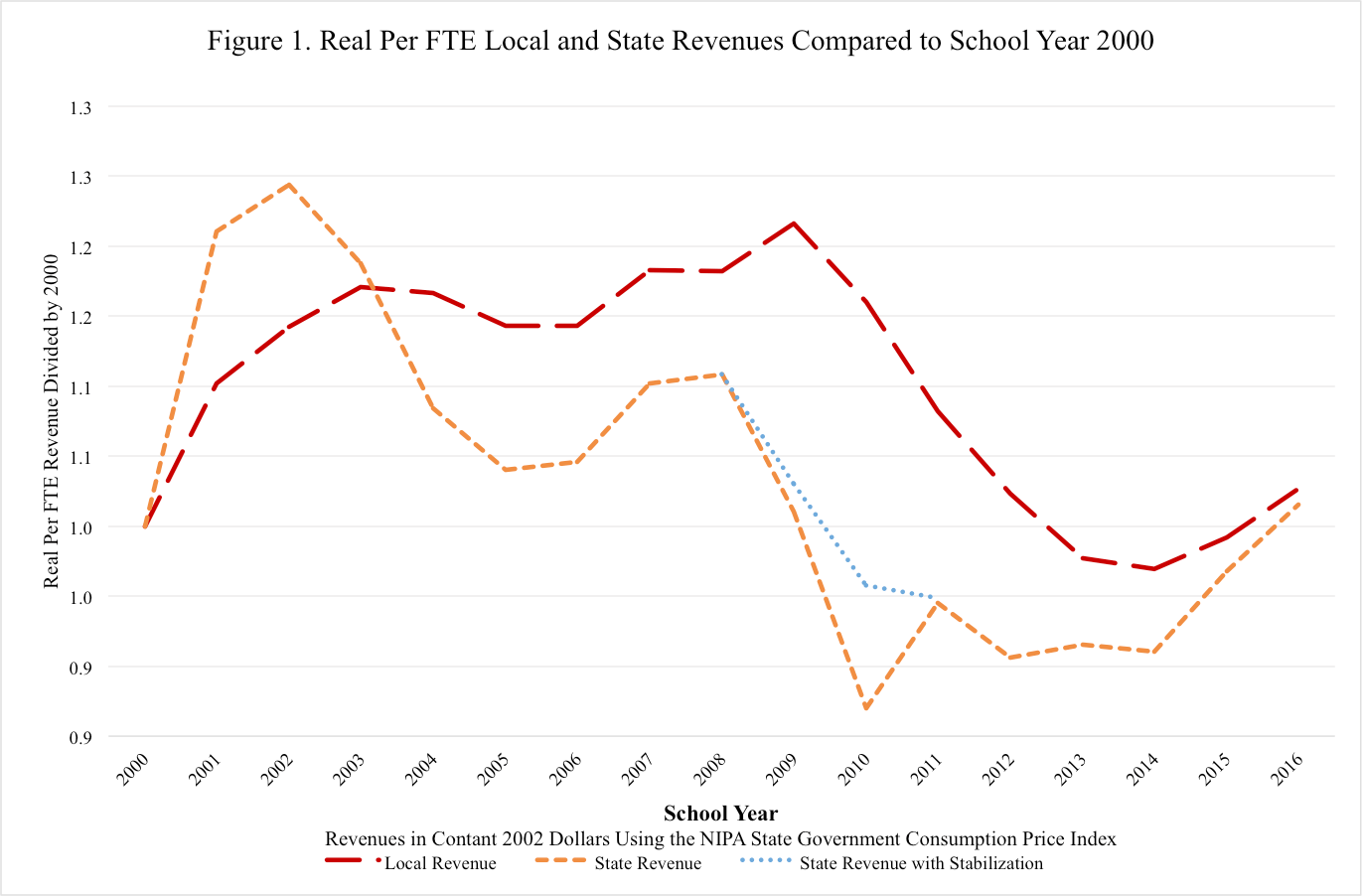 The taxable value of property is determined by the assessment process. Consequently, there was a one- to two-year lag between the collapse in the housing market and the start of declining property tax collections. This meant that there was a delay before some schools felt the brunt of the recession.

Maps 1-4 summarize the decline and recovery in real per FTE total operating revenues (local, state and federal) going into and through the Great Recession. Map 1 compares 2009, the first year of declining state revenues but preceding the decline in property tax revenues, to 2000. Sixty-seven districts were spending above their 2000 level, and 84 districts were spending just below it. The districts that were below their 2000 level were distributed evenly across the state, except for a cluster on the outskirts of Atlanta and in the southeastern counties.

By SY 2011, total operating revenues (which include both state and local revenues) had begun declining. Map 2 compares SY 2011 to SY 2000. The rural districts that are more reliant on state funding were the first to drop more than 20 percent below their SY 2000 level. 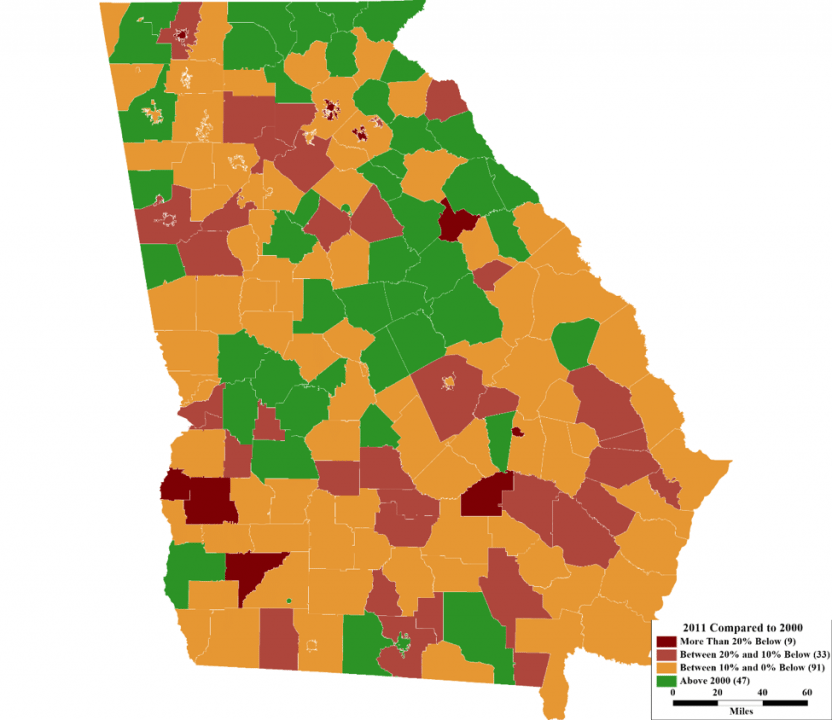 In SY 2013, property values were approaching recession lows. Map 3 shows that in that year high-property-value suburban school districts joined most of the rest of the state in having revenues more than 10 percent below 2000 levels. By this point, only 13 districts (5 percent) had revenues above their SY 2000 level.

Map 4 compares SY 2015 to 2000. By 2015, the state had started to increase K-12 funding. However, Map 4 shows that widespread recovery in school district revenues had yet to occur. The improvements, going from dark red to gold, were focused in areas of rural Georgia that relied on state revenues. As of SY 2015, only 25 districts (14 percent) were spending above their 2000 level, after adjusting for inflation and student population growth. Aside from a cluster of counties in North Georgia and another in Middle Georgia, the districts with revenues above SY 2000 levels were evenly distributed throughout the state. A large concentration of counties in the southeastern part of the state continued to have revenues more than 10 percent below their SY 2000 amount despite increasing growth in the general economy.

Georgia school district revenues are beginning to recover from the Great Recession as state funding grows and property values increase. However, many districts’ revenues remain below SY 2000 levels on a real per student basis. Different parts of the state faced different sources of fiscal stress, depending on their mix of state and local funding. Districts that rely more heavily on state funding felt the effects of the recession earlier but now have begun to recover. Districts whose primary revenue is the property tax experienced a lag between the beginning of the Great Recession and the decline in their primary revenues source. Property tax revenues did not begin to recover until SY 2015.

The report focuses on operating revenues and so excludes funding for capital outlay such as debt and education special purpose local option sales tax (ESPLOST) revenues. The education data come from the Georgia Department of Education’s detailed revenue and expenditure files and their fall full-time equivalent (FTE) student counts. Not all students attend all day or all year, so FTE student counts adjust student head counts into their full-time equivalent. Additionally, when comparing funding over time, the report uses the NIPA table 3.15.4 inflation index for state and local government consumption expenditures, which is the index that best approximates the bundle of goods purchased by school districts. This index does have a larger effect on inflationary adjustments for revenues early in the 2000s than other commonly used indices such as the Gross Domestic Product Implicit Price Deflator.