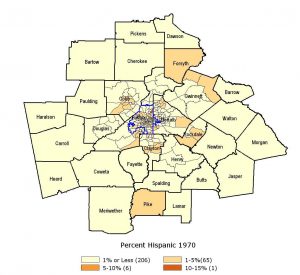 ATLANTA—The nonwhite population has doubled and segregation has decreased as the Atlanta metropolitan region has grown by more than 300 percent over the past 45 years, according to new research by the Center for State and Local Finance at Georgia State University.

However, metro Atlanta’s evolving and increasingly diverse population most strikingly shows the dramatic transformation from 1970-2015, the study finds.

“The racial composition has changed so dramatically — it’s really stark,” said David Sjoquist, professor of economics at the Andrew Young School of Policy Studies. “I don’t think people recognize how that diversity is spread out across the metro area.”

The level of segregation has decreased across the entire area, meaning people of different races and ethnicities are living more and more in the same neighborhoods.

Sjoquist and Lakshmi Pandey, a senior research associate at the Center for State and Local Finance, examined the evolution of metro Atlanta’s race, age, income and education trends from 1970-2015 in the new report, “The Changing Face of Atlanta.”

“Over the years,” Pandey said, “we have been looking at pieces of the data, but when you put it all together and lay the maps side by side, it more clearly tells the story of how a small, Southern city grew up to become a large, cultural metropolis.”

The research points out there are relatively fewer children in metro Atlanta than before, with a precipitous drop over time in the percentage of households with residents ages 1-17. The data also illustrate that many metro Atlantans are simply aging in place, with the trend manifesting more in the outer suburbs.

Other trends include more residents earning at least a college degree and a shrinking middle class, with more families in the high-income category. The researchers used the data from the U.S. Census Bureau to complete the study.

To read the report and view a series of 70 maps (illustrated separately and also combined in a dynamic feature), as well as additional charts about Atlanta’s changing demographics, visit this webpage: http://cslf.gsu.edu/changing-face-atlanta/.